To make a long story short…

Once upon a time my friend, Rafal, asked me to buy a few classic models. This beautiful 964 Carrera 4 was one of them. Rafal didn’t want to keep the car. I placed an ad and then a new owner, Tomek appeared. Tomek wanted to drive the car everyday but the car didn’t really want to be driven everyday… Alternator belt broke during the first drive. Some fuel distribution problems, meanwhile I broke the only key. Some other issues happened. The car was tired. Too tired to use it as a daily driver.

We started to name the car Woron (Vo-ron). It’s Russian for crow and it sounds kinda funny. The nickname evolved to many other forms e.g. Worończyk. We name every car we build or rebuild. We recommended Tomek to rebuild Woron. It’s similar to building a house. There’s a lot of possible upgrades. Some of them are nice, some of them are desirable but the bill says ‘don’t do it’. And there’s always more you can do and more you can spend. The idea was to make it look stock and to modify the engine and suspension.

The procedure was very typical. We dismantled and opened literally every single part to make a list of things to repair or to buy. We noticed more metal work will be needed than we expected. The car had an accident in the past. Badly repaired unfortunately. Bondo on rust, paint on bondo. Not professional. Right front member needed to be rebuilt. We changed some other panels like the trunk floor and found some typical corrosion. Quality of metal parts in a 964 generation is great. Porsche learnt a lot from 1975 when they started zinc coating. Anyway, there’s always something to do with metal parts. Sometimes it’s less expensive to buy panels, we build from scratch other ones. Everything is doable.

We painted the car in the same black color code. The paint was protected by a high quality self healing film known as PPF.

CarBone 964 restoration. Woron. Chassis was badly repaired after an accident. Some typical rusty spots on the right pic. 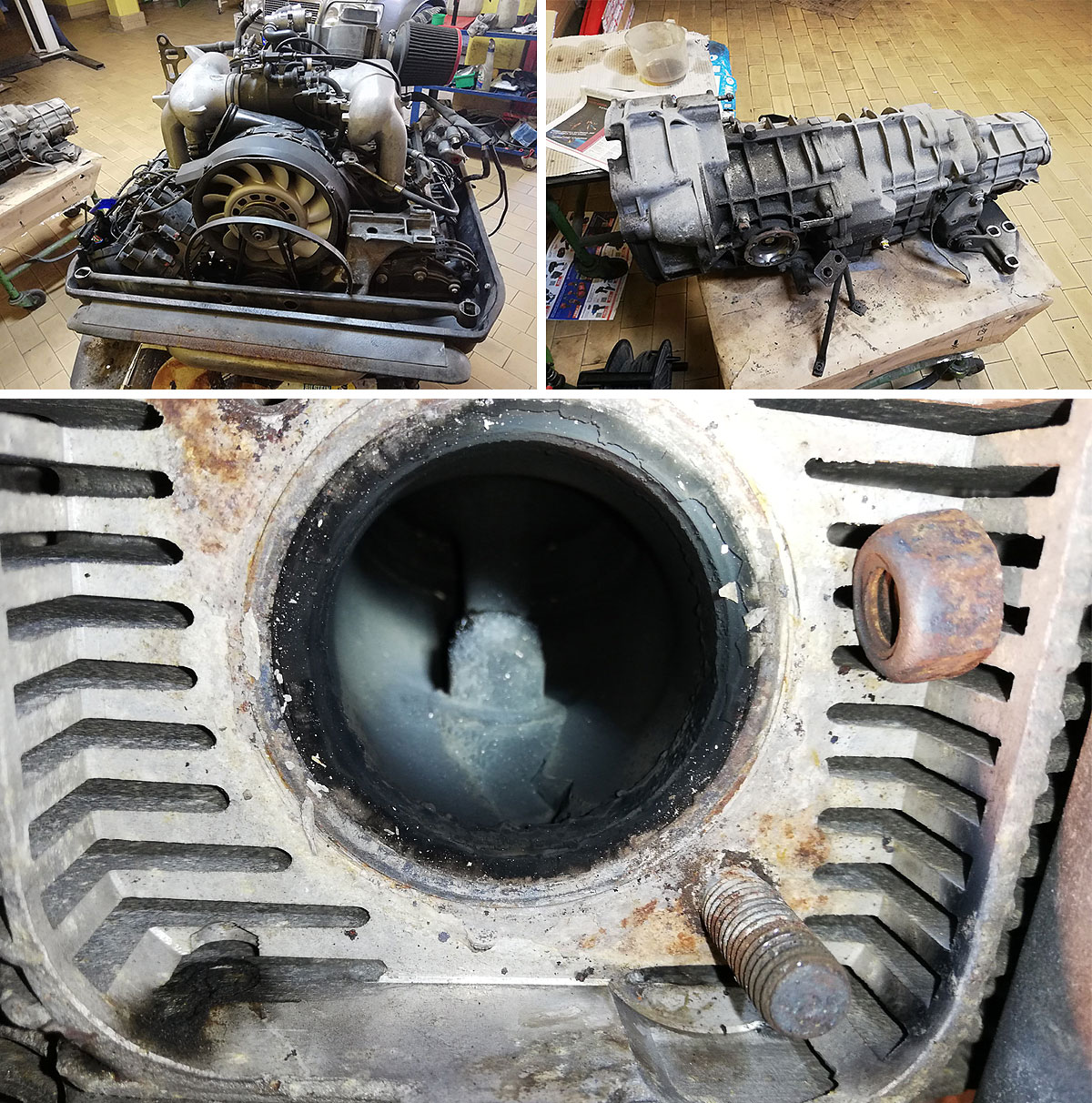 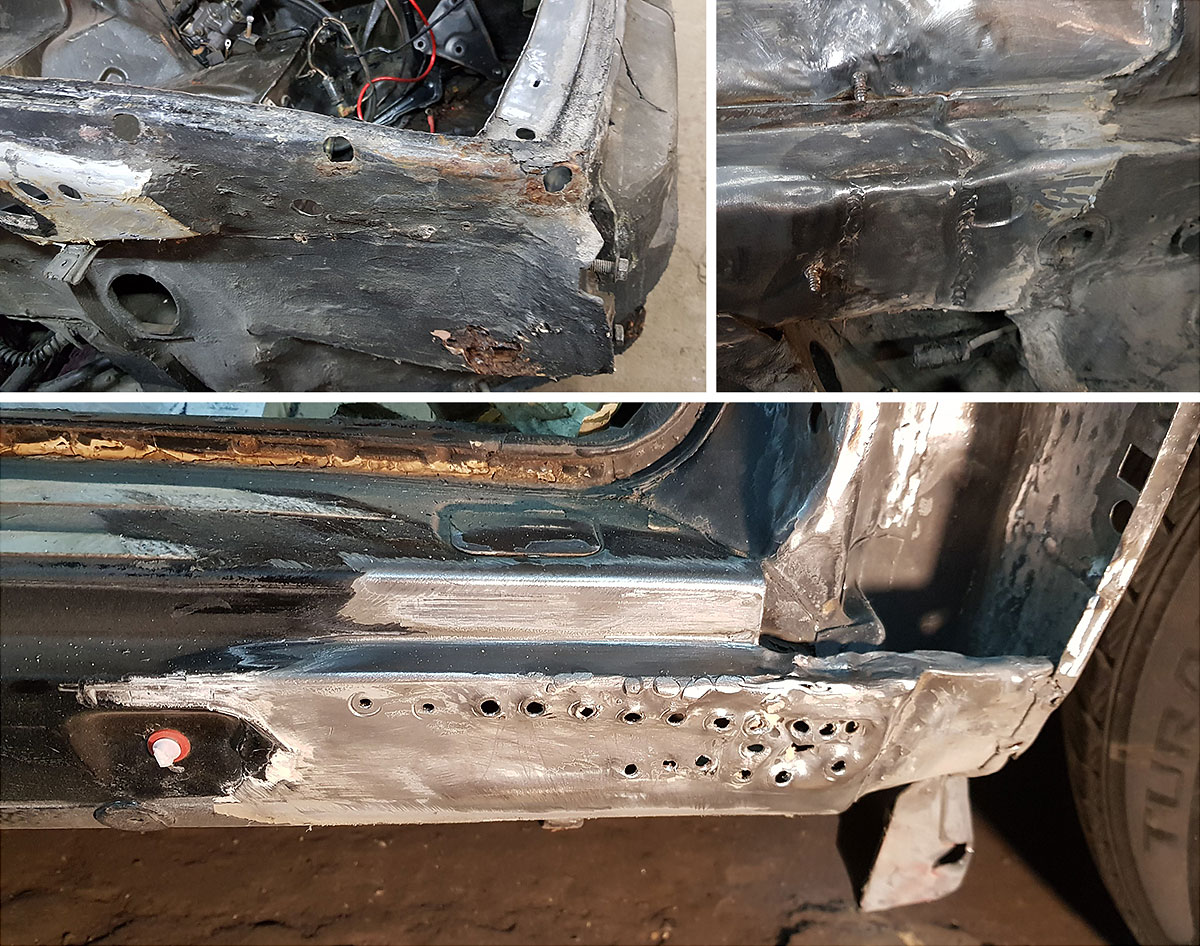 CarBone 964 restoration. Woron. Chassis was badly repaired after an accident. 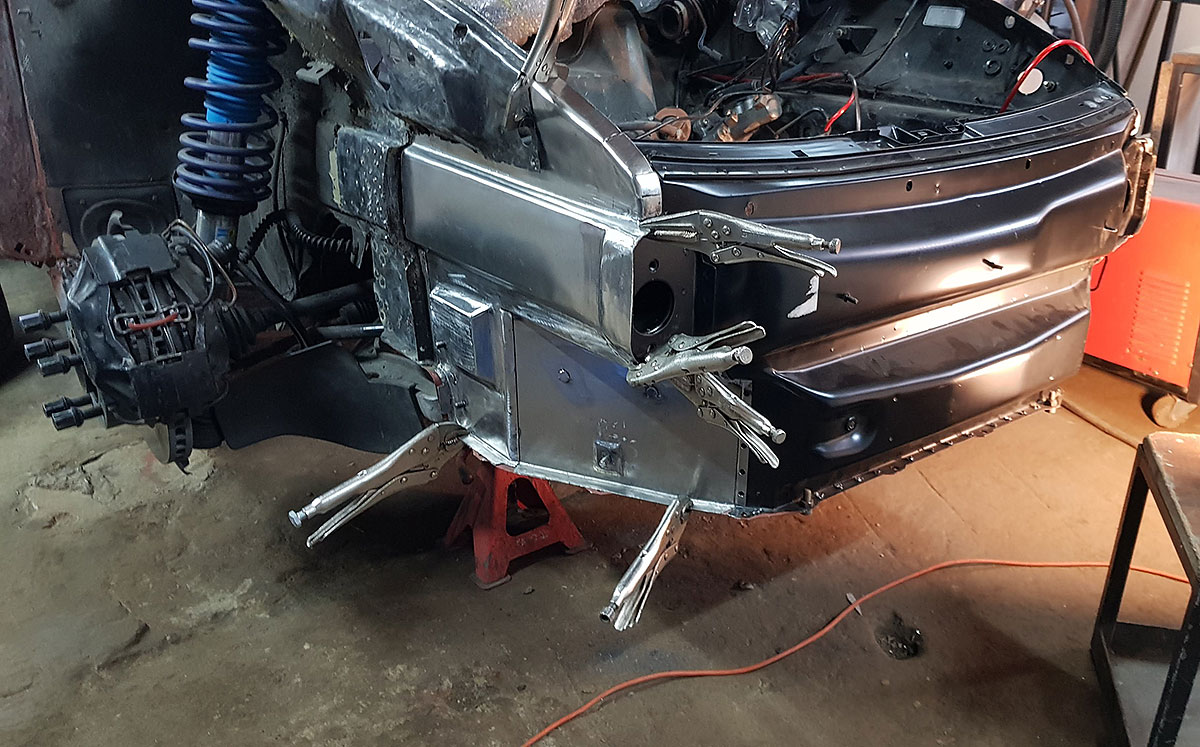 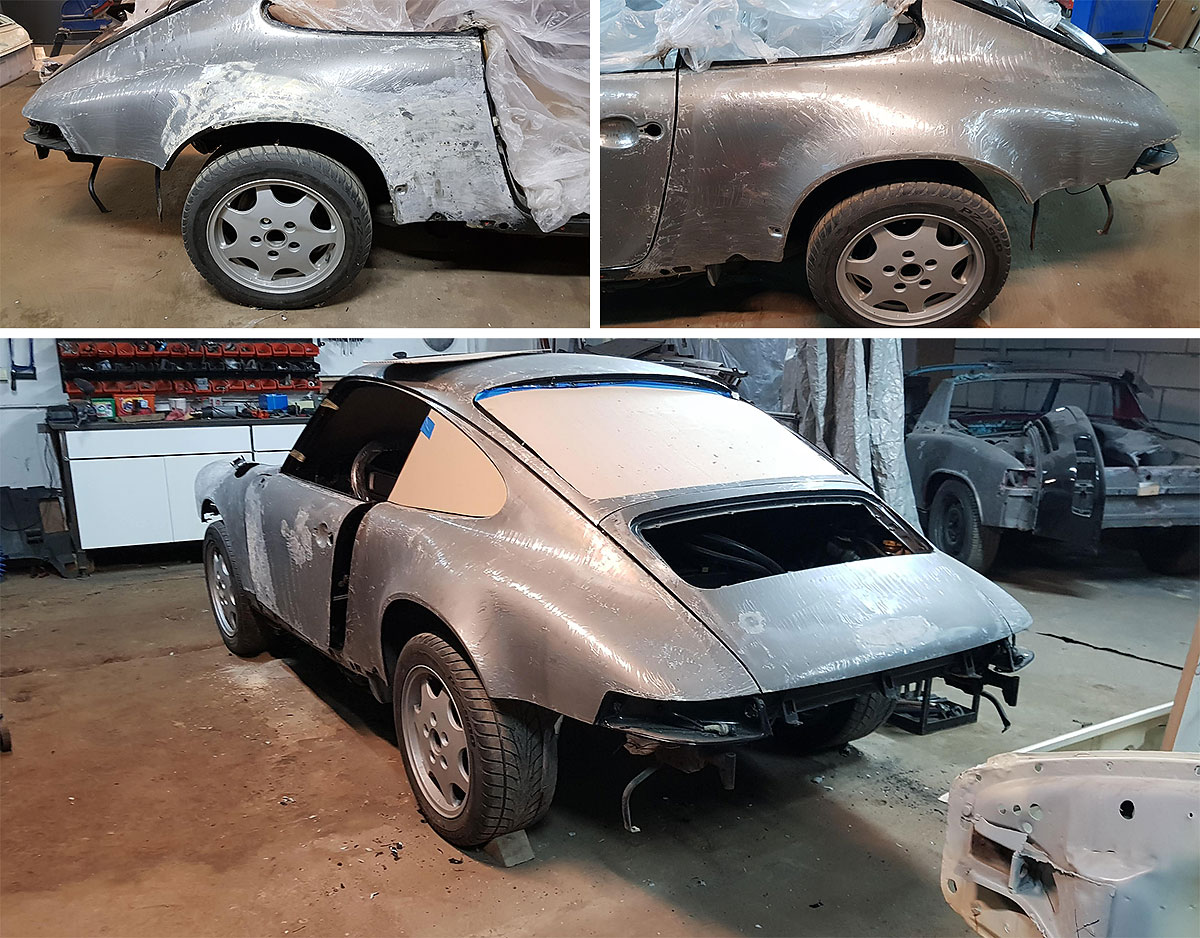 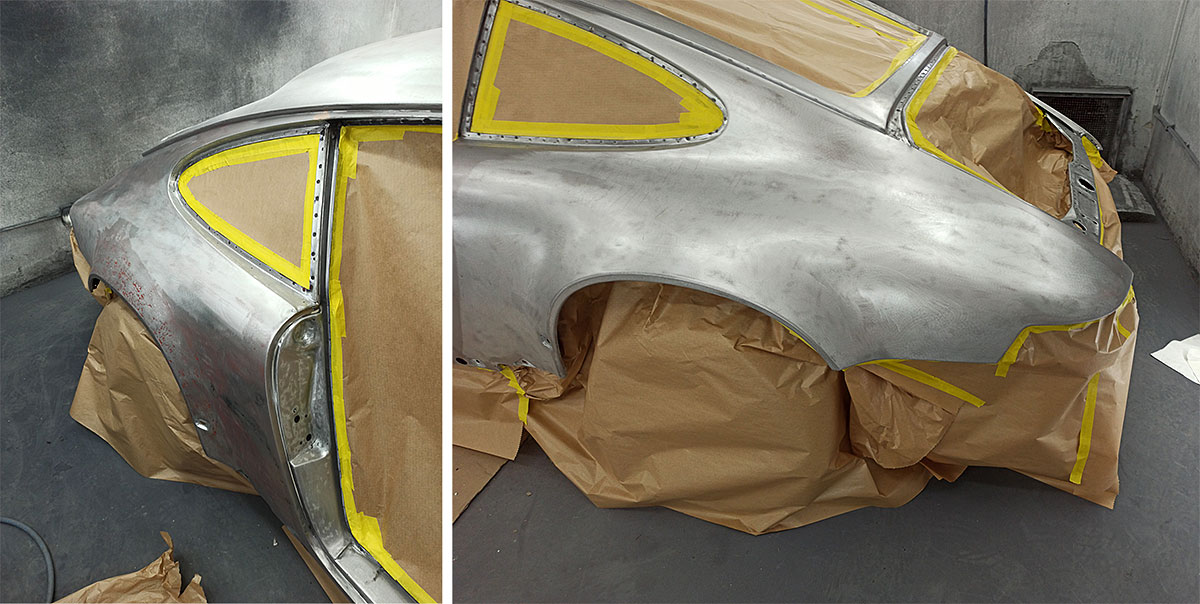 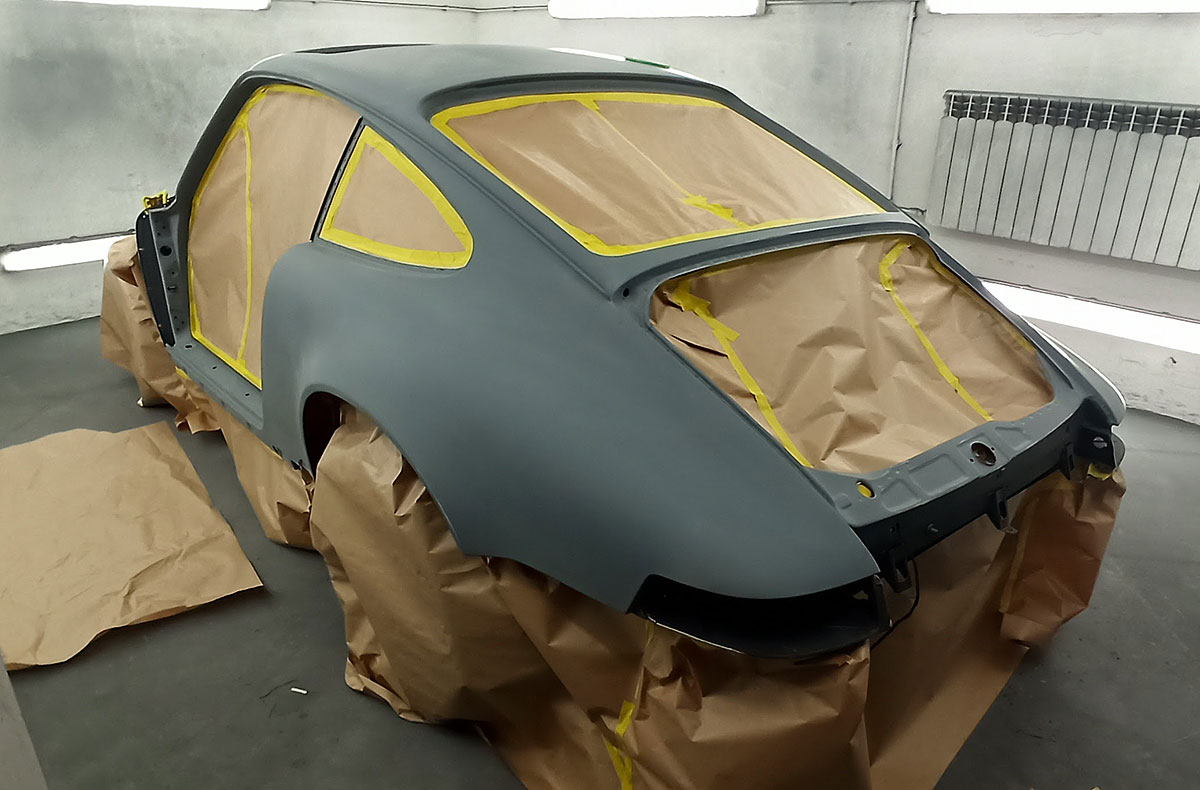 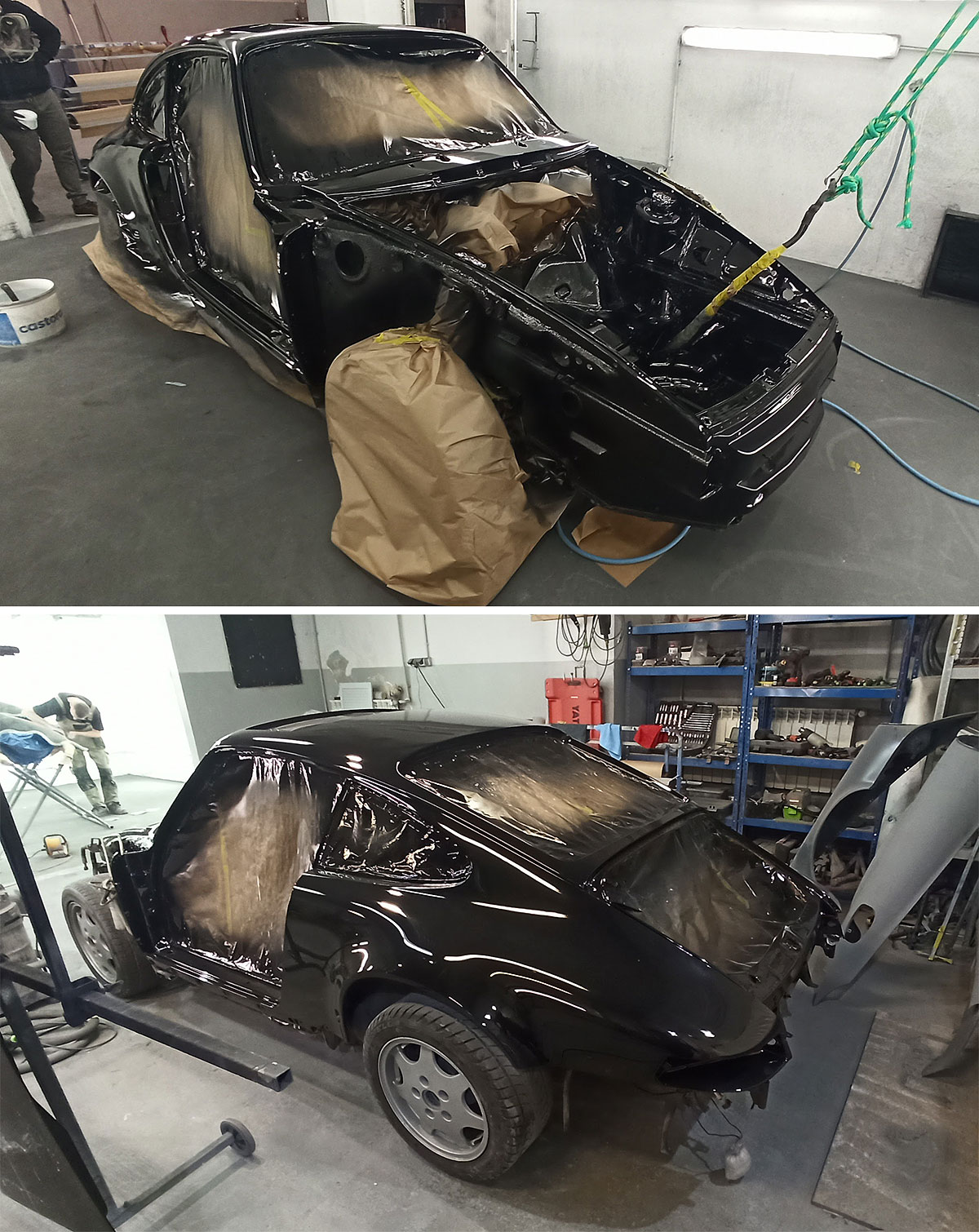 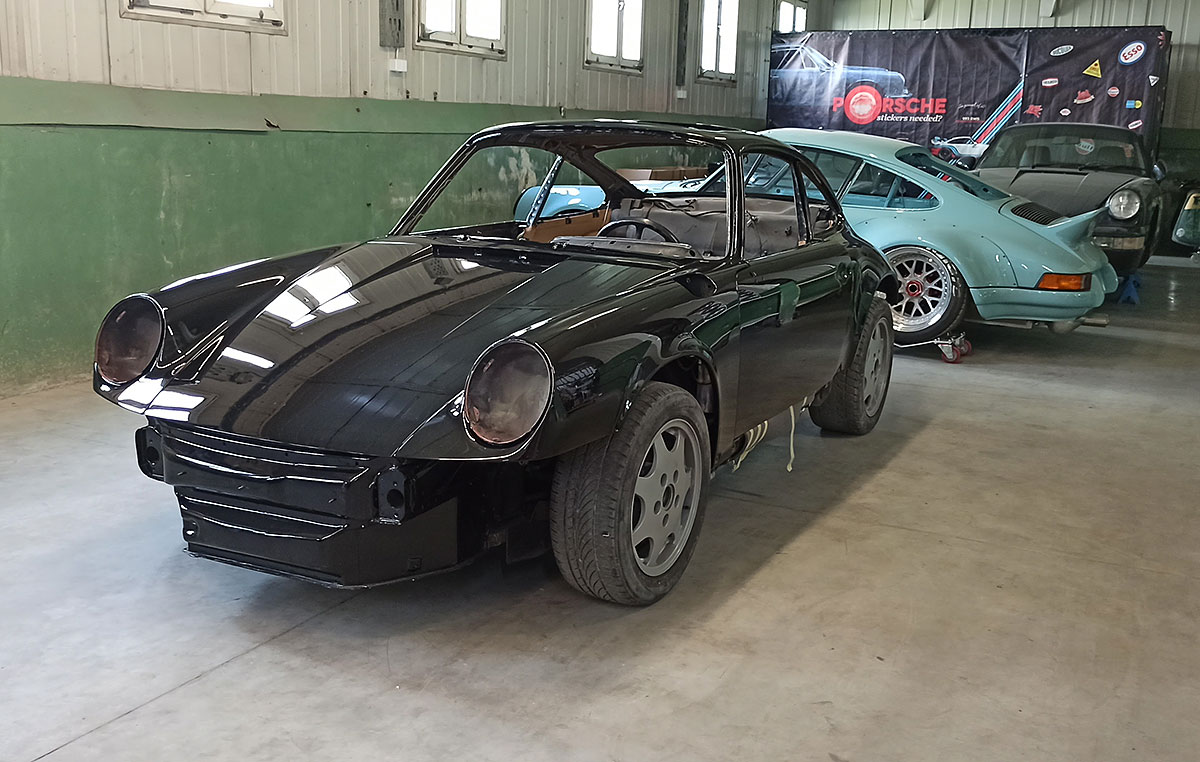 The engine worked nicely. But pistons and cylinders looked terrible. We wanted to put more power to the engine, however using a 3.8 set would increase the budget.

Regarding a 964 generation, everything beyond 300hp is super expensive. We decided to use a 3.6 cylinder set plus some smart upgrades. RS light flywheel, ‘hot wire’ MAF sensor conversion and a DME chip upgrade. We also installed a Fabspeed full exhaust system. The power was increased to around 300hp. 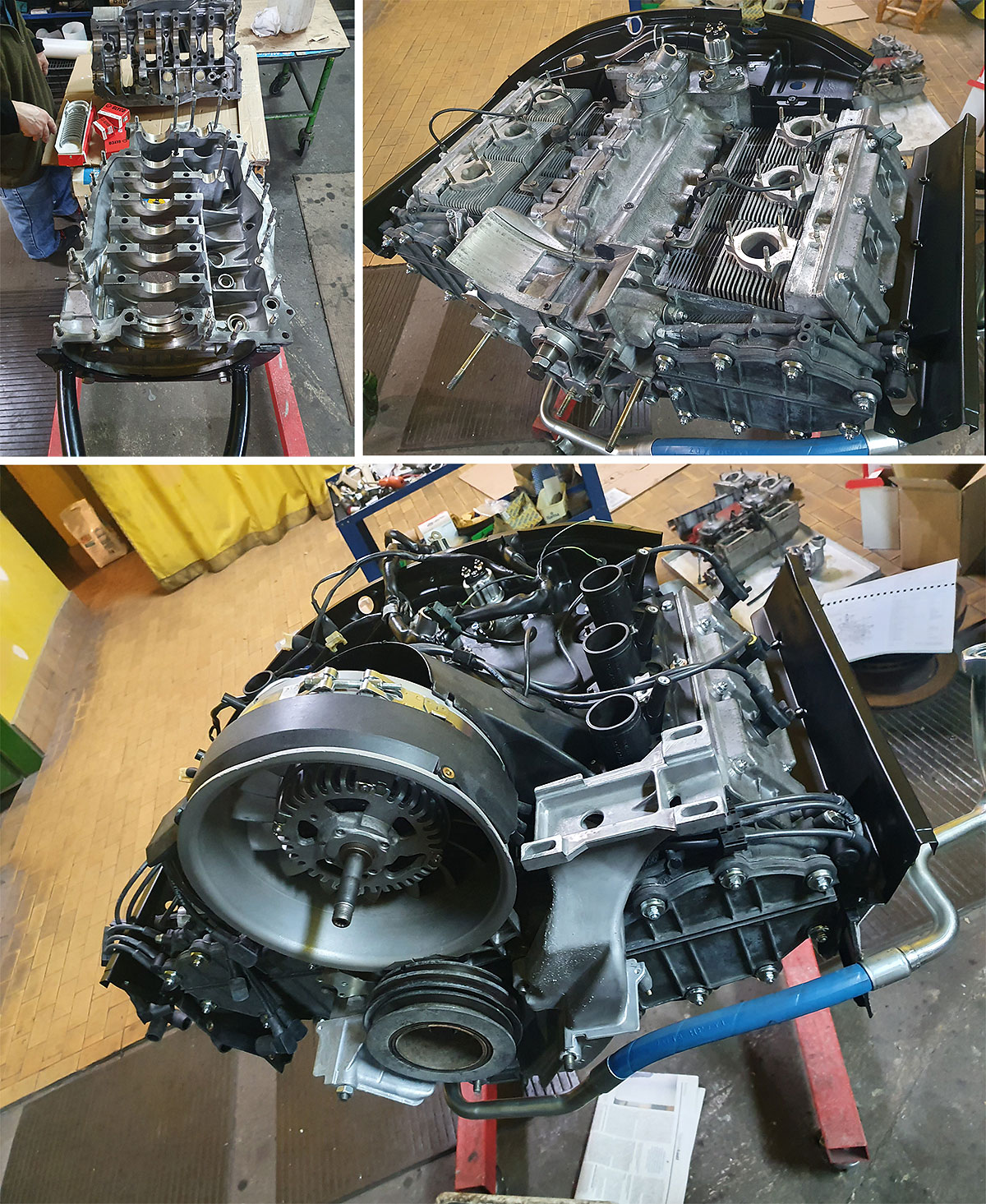 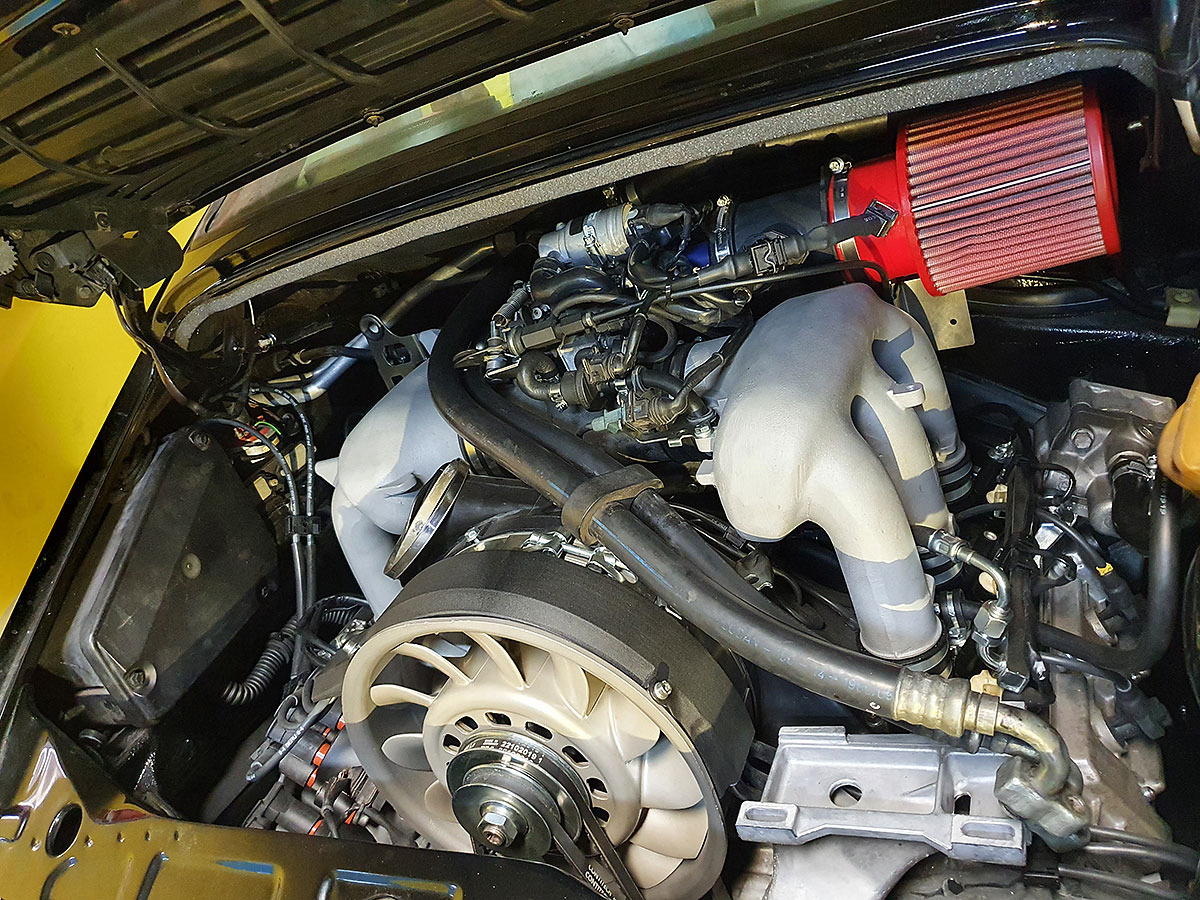 964 suspension is great. The best upgrade you can do is a Bilstein B6 shocks combined with H&R springs and a good wheel alignment. Worth mentioning, you can have the best suspension in the world but good alignment is a thing that makes the car fast in corners. We know how it works and how to do it right.

Fuchs wheels refer to classic G-model style. Notice a 964 wheel offset is different than in the F or G model. We can’t install deep offset wheels until we make the car wider or modify axles. Modern Fuchs look classy anyway. A great detail. Silver spokes on a black background suit this car. 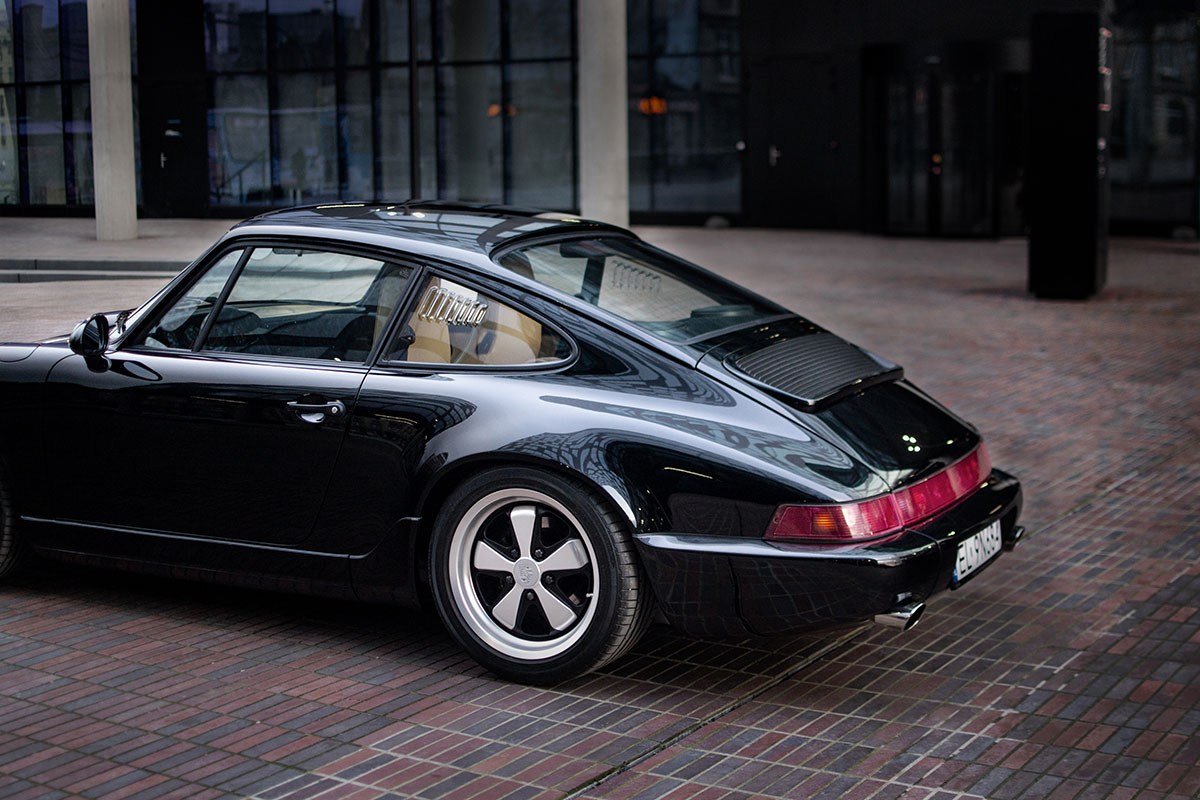 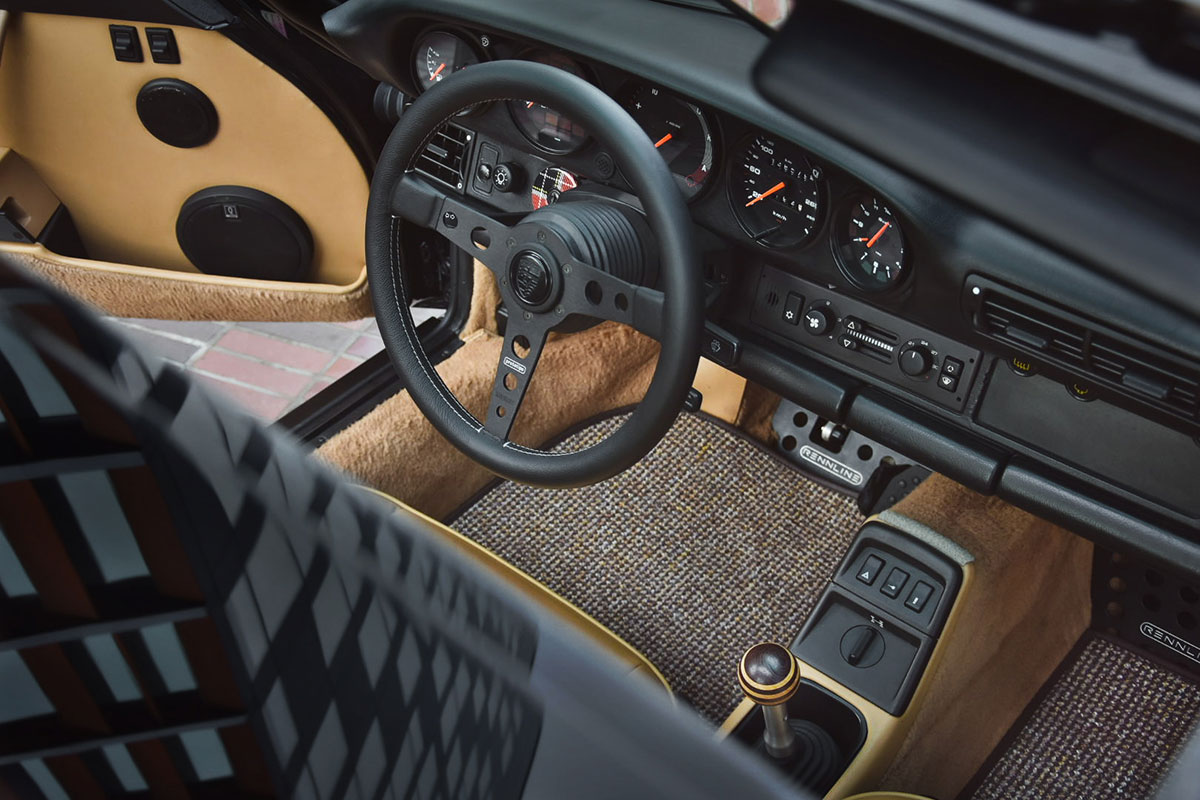 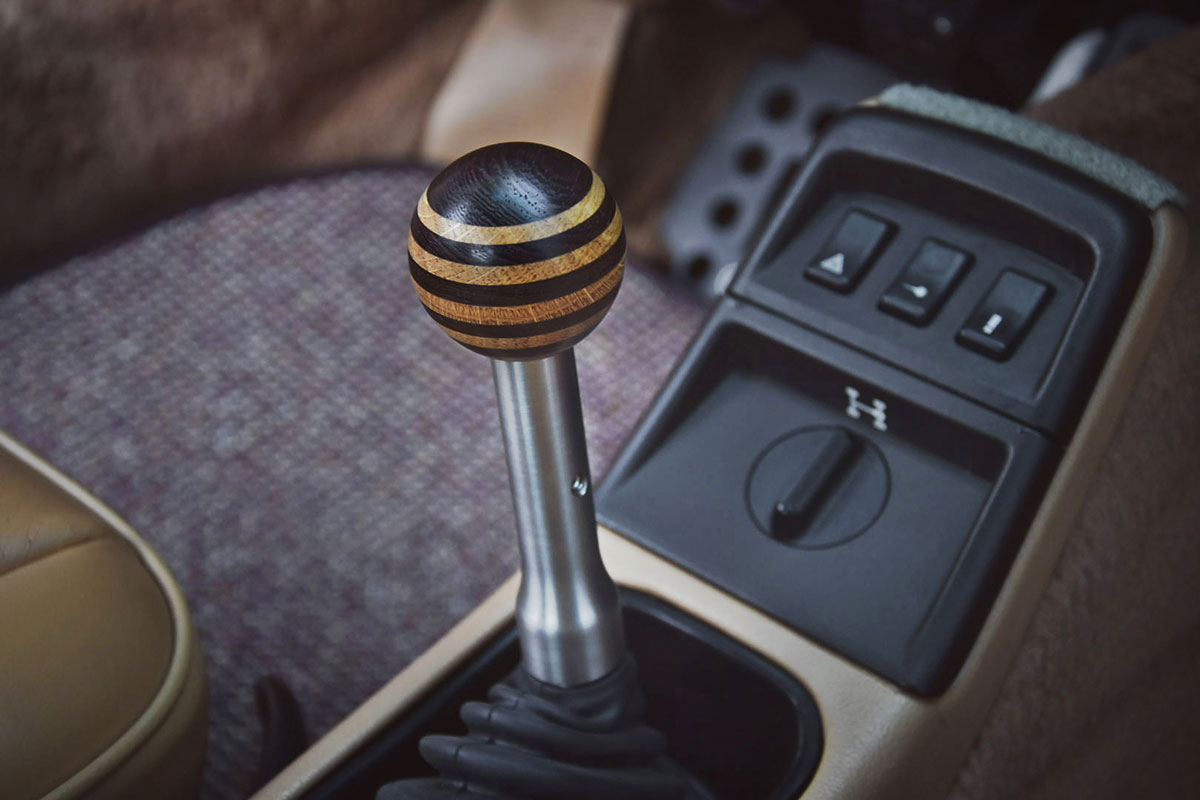 RS air vents are very often just styling. In a real 964 RS they were responsible for venting brakes. We installed hoses and air deflectors to make them work correctly. Notice air vents were installed instead of front fog lights. A fog light switch became redundant. We left it on a dashboard but used a different spades icon. Tomek, the car owner, is a nut for poker. It was fun incorporating some other referring to cards details. We prepared two customized surprises. Gauges set and a fuel bib. The RPM gauge is scaled with a royal flush order. Cards icons were incorporated to other gauges and to the fuel bib. Tomek was super stoked with the result. Nothing but seeing a happy customer after the restoration, smiling and shouting. Woron was fun. 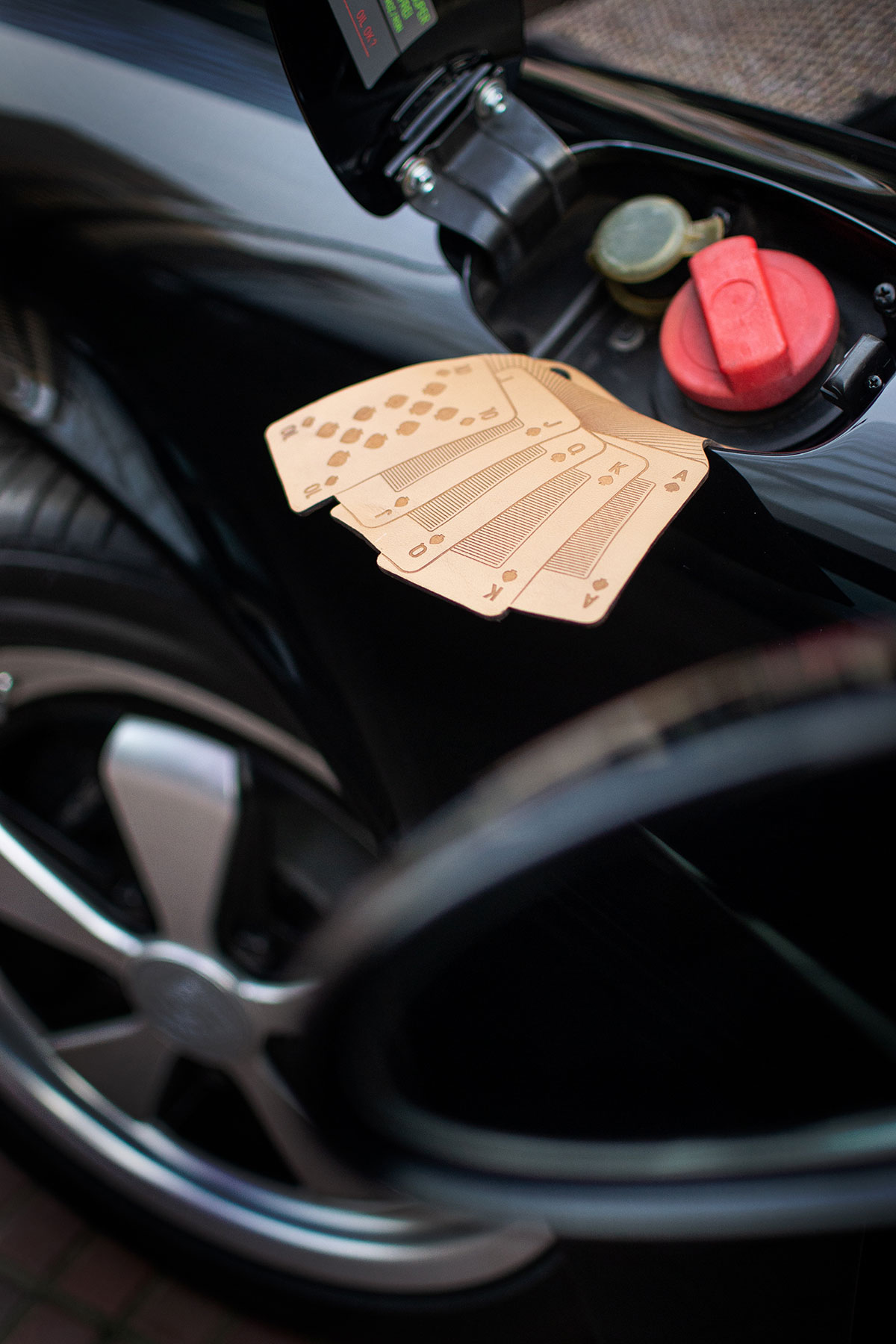 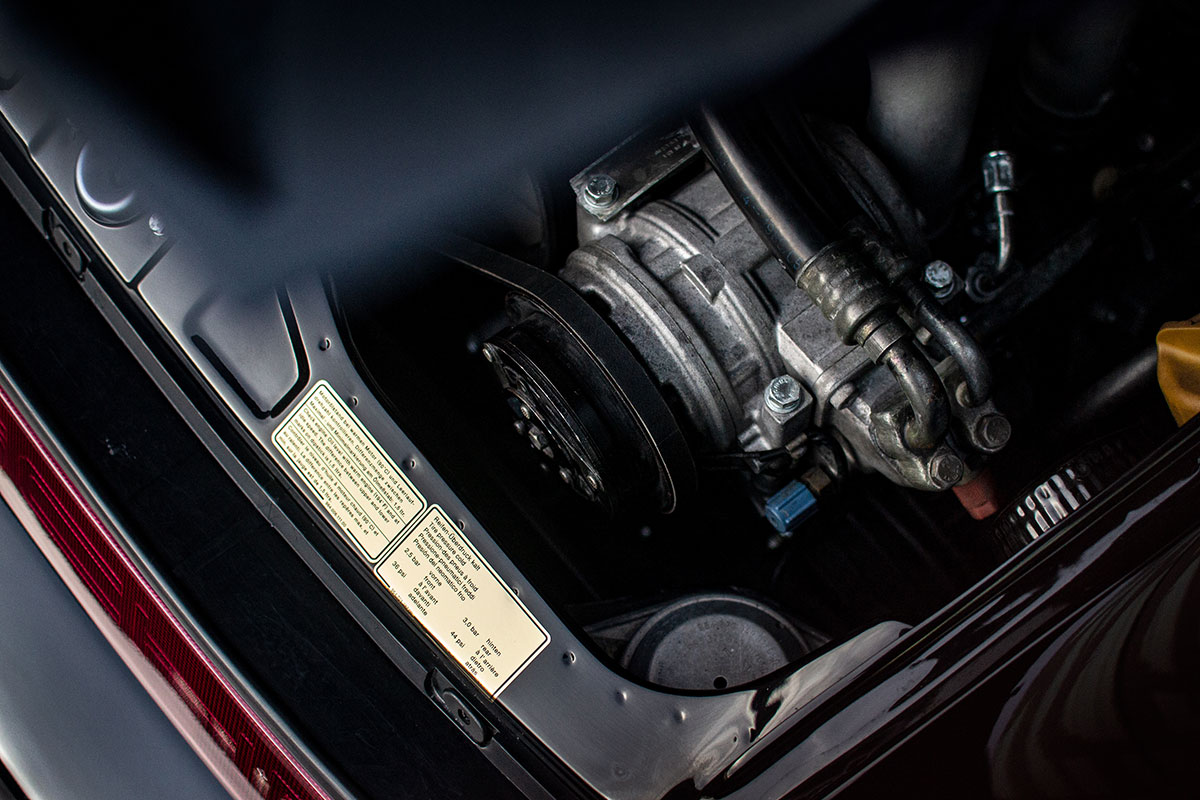 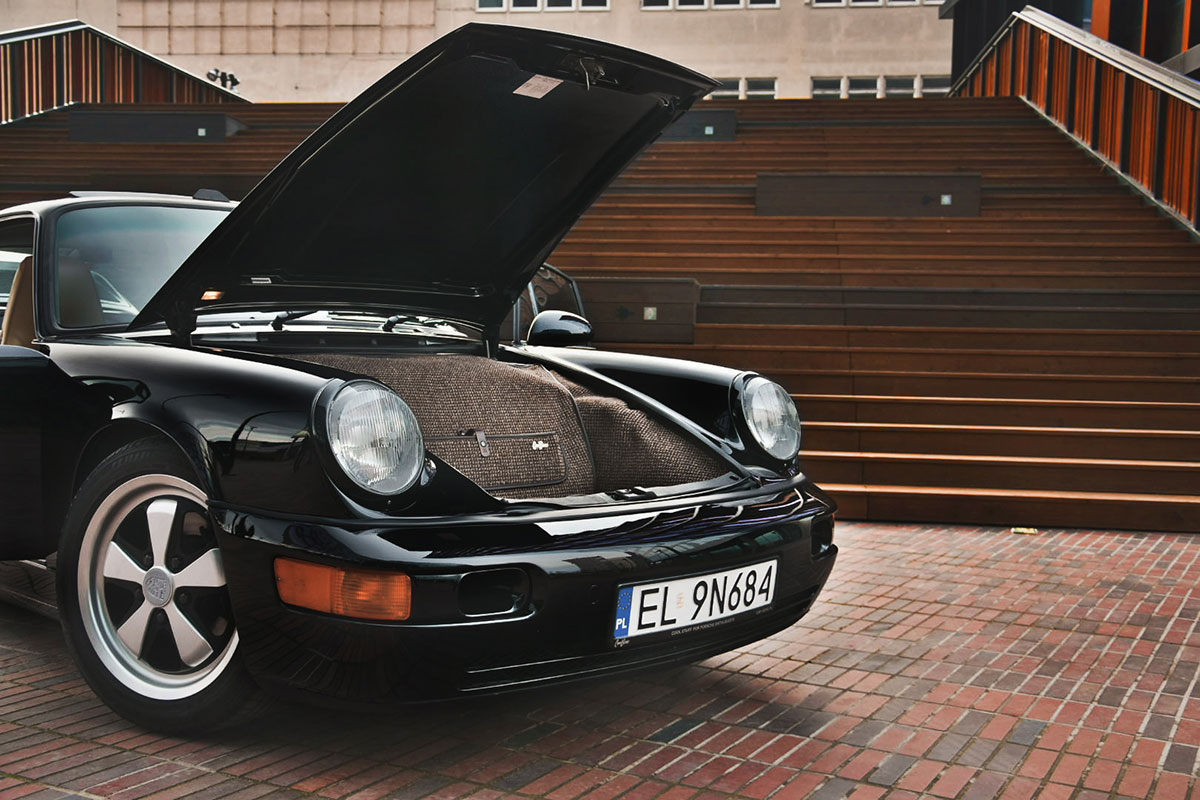 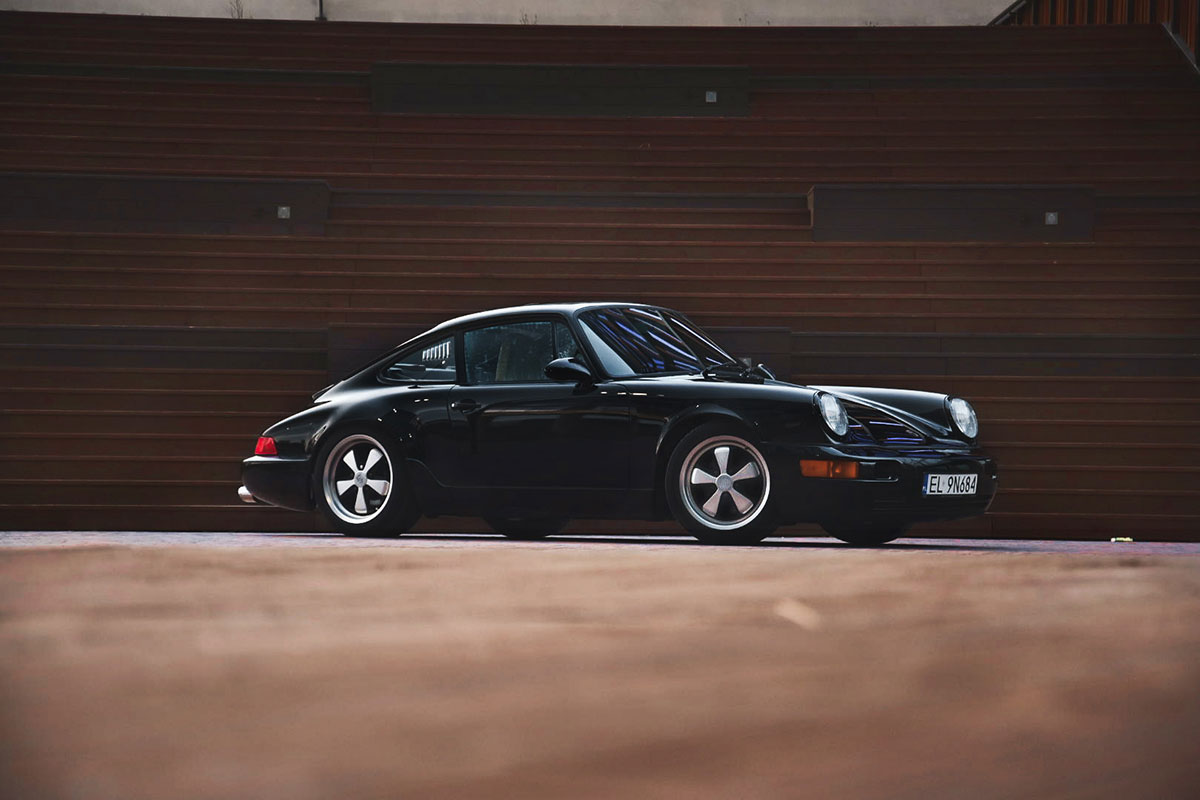 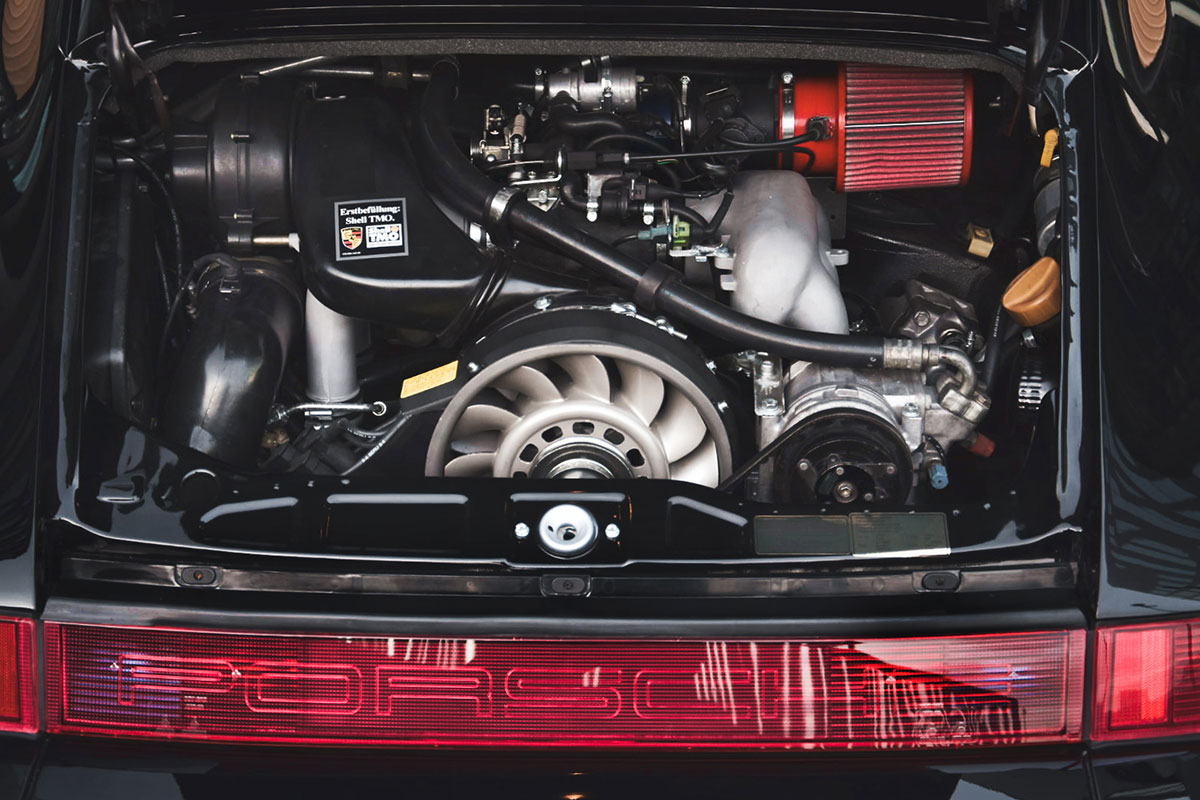 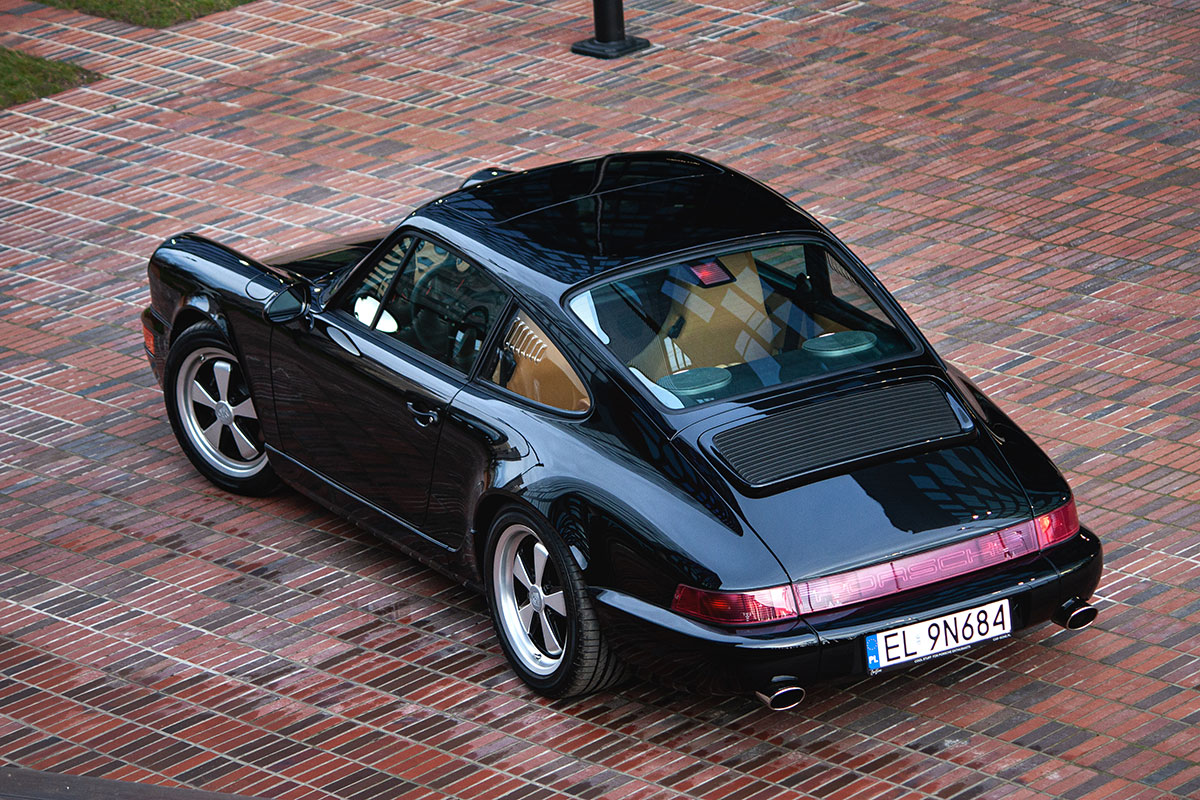